Uterine Fibroid Embolization (UFE), also known as Uterine Artery Embolization, is performed while the patient is conscious but sedated and feeling no pain. It does not require general anesthesia.

The physician makes a tiny nick in the skin in the groin and inserts a catheter into the femoral artery. Using real-time imaging, the physician guides the catheter through the artery and then releases tiny particles, the size of grains of sand, into the uterine arteries that supply blood to the fibroid tumor. This blocks the blood flow to the fibroid tumor and causes it to shrink and die. No surgery, no scars, and the uterus is not removed. The fibroids start shrinking and the symptoms improve.

Fibroid Embolization is done as an outpatient procedure or may require a hospital stay of one night. Pain-killing medications and drugs that control swelling typically are prescribed following the procedure to treat cramping and pain. Many women resume light activities in a few days and the majority of women are able to return to normal activities within seven to 10 days.

On average, 85-90 percent of women who have had the procedure experience significant or total relief of heavy bleeding, pain and/or bulk-related symptoms.
The procedure is effective for multiple fibroids and large fibroids.
Recurrence of treated fibroids is very rare. Short and mid-term data show UFE to be very effective with a very low rate of recurrence. 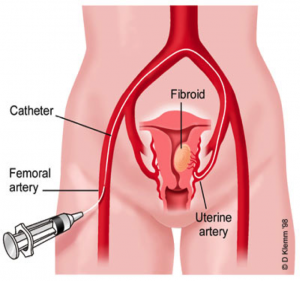 There have been numerous reports of pregnancies following Uterine Fibroid Embolization, however, prospective studies are needed to determine the effects of UFE on the ability of a woman to have children. One study comparing the fertility of women who had UFE with those who had myomectomy showed similar numbers of successful pregnancies. However, this study has not yet been confirmed by other investigators.

Less than two percent of patients have entered menopause as a result of UFE. This is more likely to occur if the woman is in her mid-forties or older and is already nearing menopause.

Myomectomy:  is a surgical procedure which removes visible fibroids from the uterine wall.  Myomectomy, as well as UAE leaves the uterus in place and therefore  may preserve the ability of a woman to have children.  There are several manners to practice myomectomy which includes hysteroscopic, laparoscopic and open abdominal procedure.

Hysteroscopic Myomectomy: is used only in fibroids which are placed below the most internal layer of the uterus and protrude towards the uterine cavity. Does not require a surgical cut.  The physician inserts a hysteroscope within the uterus through the vagina and uterine neck and removes fibroids with a surgical instrument which is attached to the hysteroscope.  Usually, this is an outpatient procedure carried out under anesthesia, and the patient is unconscious.

Laparoscopic Myomectomy: is used when fibroids are in the outer wall of the uterus.  Small incisions are carried out to insert a tube  with a small camera attached others and with instruments within the abdomen to remove tumors.  It is carried out with patient under general anesthesia.  The average recovery time is two weeks.

Abdominal Myomectomy: is a surgical procedure by which an incision is carried out in the abdomen to reach the uterus and another in the uterus to remove the tumor. Once withdrawn the tumors the uterus is closed with stitches.  The patient is under general anesthesia and is unconscious during the procedure which requires several days of hospitalization.

While myomectomy is frequently successful in the control of symptoms, when the uterus has more fibroids less success may be the surgical procedure.  Additionally fibroids may grow back after several years after surgery.

In a hysterectomy the uterus is removed by an open surgery.  This operation is considered a major surgery and is performed under general anesthesia. It requires three of four days of hospitalization and recovery period is about 6 weeks.  Some women are candidates for a more advanced procedure by laparoscopy.  The recovery period for this method is significantly shorter.

Hysterectomy is a procedure commonly applied as a therapy to patients with fibroids.   It is usually performed on patients that have completed their fertile age or those women who understand that after this procedure they cannot get pregnant. It is radical.

Embolization of the uterine arteries is not new. It has been used successfully by interventional radiologists for more than 20 years to treat heavy bleeding after childbirth.

Embolization has been used to treat tumors since 1966. Embolization to treat uterine fibroids has been performed since 1995 and the embolic particles are approved by the FDA specifically to treat uterine fibroid tumors, based on comparative trials showing similar efficacy with less serious complications compared to hysterectomy and myomectomy (the surgical removal of fibroids).

Embolization of fibroids was first used as an adjunct to help decrease blood loss during myomectomy. To the surprise of the initial users of this method, many patients had spontaneous resolution of their symptoms after only the embolization and no longer needed the surgery.

UFE is covered by most major insurance companies and is widely available across the country.

Most women with symptomatic fibroids are candidates for UFE and should obtain a consult with an interventional radiologist to determine whether UFE is a treatment option for them. An ultrasound or MRI diagnostic test will help the interventional radiologist to determine if the woman is a candidate for this treatment.
Many women wonder about the safety of leaving particles in the body. The embolic particles most commonly used in UFE have been available with FDA approval for use in people for more than 20 years. During that time, they have been used in thousands of patients without long-term complications. 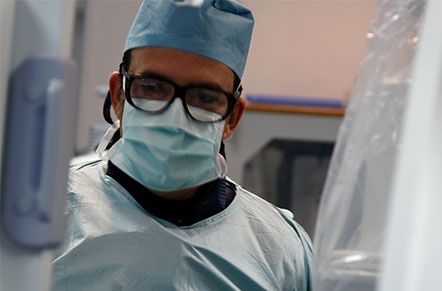 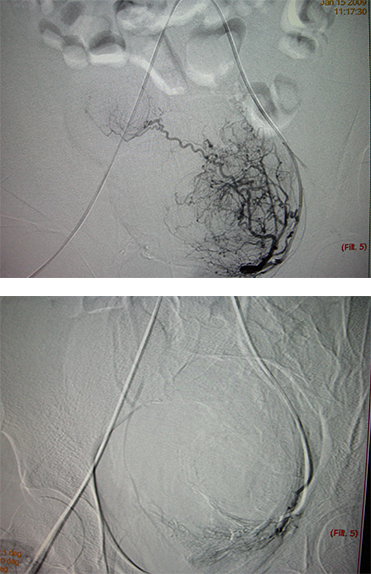 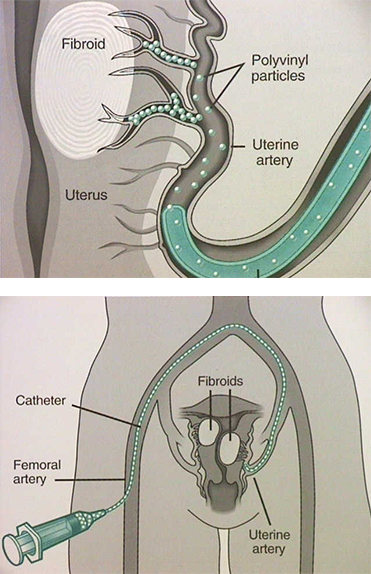 Get More Information orRequest A Consultation Now
Call: 305-907-6191Do you have questions? Call us today