Fibroid embolization usually is done as an outpatient procedure, or may  require a hospital stay of one night. Pain-killing medications and drugs that control swelling typically are prescribed following the procedure to treat cramping and pain. Many women resume light activities in a few days and the majority of women are able to return to normal activities within seven to 10 days. 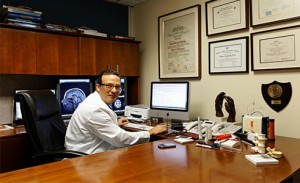 There have been numerous reports of pregnancies following uterine fibroid embolization, however prospective studies are needed to determine the effects of UFE on the ability of a woman to have children. One study comparing the fertility of women who had UFE with those who had myomectomy showed similar numbers of successful pregnancies. However, this study has not yet been confirmed by other investigators.

Less than two percent of patients have entered menopause as a result of UFE. This is more likely to occur if the woman is in her mid-forties or older and is already nearing menopause.

UFE is a very safe method and, like other minimally invasive procedures, has significant advantages over conventional open surgery. However, there are some associated risks, as there are with any medical procedure. A small number of patients have experienced infection, which usually can be controlled by antibiotics. There also is a less than one percent chance of injury to the uterus, potentially leading to a hysterectomy. These complication rates are lower than those of hysterectomy and myomectomy.

Get More Information orRequest A Consultation Now.
Call: 305-907-6191Do you have questions? Call us today
uxicached